Posted by Preferred Partners, LLC. in Motivation on June 15, 2015 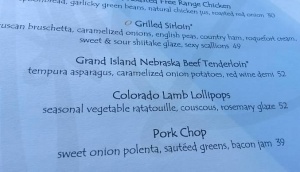 The Bellagio in Las Vegas is one of the most opulent places I’ve been fortunate to visit. It’s massive, with more than 4000 rooms, and full of extravagance, from its marble floors to the spectacular water show in front. When I’m there, I feel like I’m in another world. That’s why I was stunned when I saw the Grand Island Nebraska Tenderloin Steak on the menu at Olives, one of Bellagio’s elite restaurants.

I was born and raised about 50 miles from Grand Island, in a small little town without a stoplight, much less a movie theater. During my childhood, Grand Island, population 35,000 at the time, was the big city. It’s where we went to go shopping, to a movie or on some other type of adventure. With its restaurants, movie theaters, miniature golf and roller skating, I felt like I was in another world when we went to Grand Island.

Grand Island is not the Bellagio. It’s not even an island, but according to the waiter I asked in Las Vegas, it’s where the best beef in the world comes from. He didn’t get an argument from me, but I laughed to myself when I thought about how others, who had no other exposure to Grand Island, might think of the city.

The Bellagio hosts visitors from all over the world, not just the United States. Many likely couldn’t find Nebraska on a map. They sure wouldn’t look in the middle of the country when they looked for a grand island. When they read “Grand Island,” what goes through their minds? Does some Japanese guy from Okinawa picture a massive island full of premium beef cattle?

Obviously, the marketing team at Olives intends just that – an idealized image that makes wherever we are and whatever we’re eating or doing feel special. Imagine if we were our own marketing team and did that for ourselves.

Imagine doing your weekly grocery shopping at “Gourmet Heaven,” where tens of thousands of fresh items are available for immediate consumption. The meals you can prepare with the ingredients there are limited only by your imagination. If you still can’t see past the many stocked aisles, think of it from a North Korean’s perspective, where supplies are rationed and resources to purchase are scarce. A North Korean in an American grocery store would have a hard time believing his eyes, yet we go to that same store with a sense of drudgery.

Imagine if you saw your job as an important opportunity to contribute to your organization’s success while working toward your goals, rather than something you have to do five days per week. It might not be your dream job, but it very well could be an important step in your journey to your dream job. Wouldn’t thinking like that make the drive in each morning a little easier?

Imagine going to a child’s game, concert or recital with an appreciation for the opportunity to share a fleeting moment with them. Sure, there are things that you might rather be doing at that moment, but instead of wasting mental energy on regret, invest that energy on enjoying the moment

Imagine marketing your life to yourself. It’s not that hard. It’s really just a matter of creating an optimum image of what we do and where we are, by focusing on the positives. Don’t wait for someone else to do it – sell yourself the Grand Island Nebraska Tenderloin Steak.