What I Learned as a Wrestler’s Parent

Posted by Preferred Partners, LLC. in Motivation on February 13, 2017

I vividly remember watching my son wrestle for the first time five years ago (pictured above). He was a seventh-grader, and I had no idea what to expect. Would he struggle mightily to win a handful of matches, as I had in my brief, unremarkable wrestling career, or would he find success on the mat? Would I watch one season of wrestling or spend the next several winters running around to meets?

Later this week, he’ll wrestle in his final state tournament. The last time we were at the state tournament, at the end of his sophomore season, he stepped off the championship platform with a third-place medal. A junior and a senior occupied the two higher spots, and he beamed with confidence and anticipation of the two seasons ahead of him.

After a football injury forced him to sit out his junior year, we hoped he could pick up where he left off. The first and second place guys had graduated, and he had never lost to anyone in his class. We hoped it would be a year of relatively easy victories, but that’s rarely how wrestling works. We know that now.

We also know that wrestling not only develops athletes, it teaches their parents some pretty remarkable things as well – things I wish I had learned much earlier.

Patrick won that first match six years ago. I have no idea if he’ll win his last match, but I’m glad that I was along for the ride. 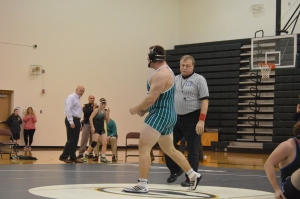